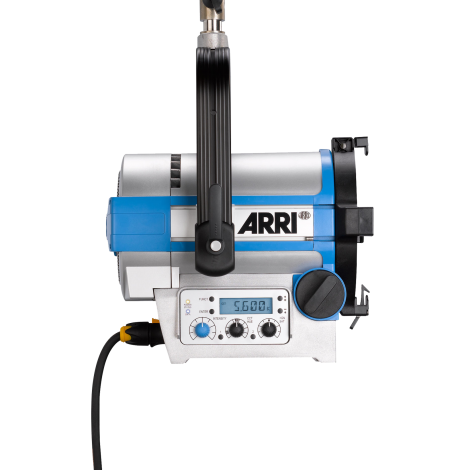 A feature-packed LED update of the classic Fresnel lamp

The ARRI L-Series is an update of the classic Fresnel light, but with all the added benefits of LED film lighting technology. All ARRI L-Series lights feature adjustable colour temperature from 2,800K to 10,000K along with RGBW colour output. And like the versatile ARRI SkyPanel LED range, tint, hue and plus/minus green can also be continuously adjusted across all colour temperatures.

The ARRI L5-C is the smallest head in the L-Series, weighing in at just 6kg. It is 45% brighter than a conventional 300w tungsten Fresnel but is cool-running and draws only 115w, making it very energy efficient. Like a conventional Fresnel, the L5-C is focusable and has barn-doors, allowing for the light output to be precisely tuned.

The ARRI L5-C can be AC mains or DC battery (23 to 36V) powered, is fitted with a combo 16mm/28mm spigot mount and has a wired DMX interface.

Get in touch with us

Unit 10, Roslin Square, Roslin Road, London W3 8DH
0208 343 1260 hire@shootblue.tv
Google Rating
5.0
Shoot Blue
5.0
Shan Phearon
18:01 04 Jun 18
My #1 supplier for the past eight years. They've helped me on countless productions offering cost-effective bespoke packages and are always reliable, with attentive comms and a thorough inventory.
Ashley David
18:16 22 Mar 18
No complaints. Good service.
Volant Thierry
15:39 22 Mar 17
Shoot Blue is an amazing rental company who's reliable and competitive in what they offer. I've had the opportunity to work with them on several different projects and their service has always been top. Highly recommended!
Zac Bowen
13:00 29 Mar 17
Super fast service! Was filming the next day and they sorted out my account and order instantly with no hassle. Easy location to pick up from as well.
Liz Smith
18:34 26 Oct 15
Shoot Blue have been my supplier of choice since 2007 ever since they were first recommended to me. Even if you're just doing a small shoot you're treated with the same care and attention as when you're on a big shoot and they go out of their way to accommodate your needs. Their prices are very competitive and the service is top notch and I always feel comfortable turning to them for advice and asking for recommendations on kit. When you hire their in house crew to work on your shoots the crew members are always really knowledgeable about the equipment and well trained, they are reliable and come to the set with a positive attitude and work hard to get the best results possible. I would highly recommend them to any independent filmmakers.
Alice Barlow
10:29 09 Aug 18
Great experience as always working with the team at Shoot Blue. Very helpful and generous. Most recently providing equipment to us on a big charity project. Would definitely recommend.
Edward Vijayavargiya
11:53 15 Aug 18
Always looking out for us in thick and thin. Rapid response times, flexible and personal service. absolute wizards!
Jakob Thorhallsson
14:33 30 Aug 18
Well kept and maintained equipment. The SB team is very friendly and always there to help!
Beyond Time Pictures
16:49 05 Sep 18
As a business owner, Director Shoot Blue has helped me build who I am as a story teller behind the camera. In my view the most important thing to my success as a story teller is knowing that I have a rental house you can always depend on. Shoot Blue has delivered outstanding service time after time again. Great job to the team :)
Nick Woolgar
11:51 06 Sep 18
Shoot Blue are a great hire company - friendly, knowledgeable, always accommodating - a pleasure to work with and my first port of call for any production!
Scott Levine
12:22 06 Sep 18
These guys are AWESOME. One stop shop for EVERYTHING in the UK!!! As a producer/director I know I can call Jon and his team anytime of the day or night and feel confident that I am in VERY good hands.
Harry Pill
17:47 08 Jan 19
Shoot Blue are a fantastic rental firm with lovely staff and awesome equipment. They supported my recent commercial production very well indeed and I wouldn't hesitate to reccomend them to any size project. They deliverted and collected the kit as neccesary, modified the order when production requirements changed and generally helped the whole process go smoothly.
Sandra Spethmann
12:09 01 Feb 19
Always quick. Always friendly. Always professional.
Ivana Raicevic
16:19 01 Feb 19
A pleasure to work with. Great and friendly staff!
John Harrigan
19:54 06 Feb 19
Fantastic service. Genuinely helpful and a pleasure to work with. Stunning equipment, we were lucky enough to shoot on vintage anamorphic lenses. Highly recommended.
See All Reviews